I have always wanted to learn the bagpipes. Twenty years ago I began lessons, but working shift work made it difficult to continue. I recently retired in Nanaimo and decided to give it a go again, even tho I’m in my mid 50s now. I searched for a pipe instructor online. I met Graham Davidson and began lessons in December of 2020. As covid kept most people home, I began lessons over video chat, which worked out better then I expected.
I have continued to progress with Grahams help and patience…along with much practice.
He has taught me several songs, techniques and musical theory. Graham encourages you to challenge more difficult music and theory, which has advanced my skills a great deal.
It’s never too late to learn to play the bag pipes. I see him in person now and thoroughly enjoy my weekly lessons.
– Clarence Dykema

My daughter has been taking weekly solo lessons with Graham for over 3 years now. During this time Graham has helped her to develop better technique, musicality and overall performance in her playing. Through his instruction and vast experience along with her hard work, she has steadily progressed through the piping ranks. Graham’s patience, passion and knowledge for playing and helping others to play to the best of their ability is one of his many attributes. We are so very lucky to have this well respected member of the piping community here on Vancouver Island.
– Anita Wilson

A few years ago, we were looking for a piping teacher for our then 8 year old son. We came across Graham, and we quickly discovered how lucky we were to find him! Graham was fantastic at teaching our son the crucial fundamentals that are needed to grasp the playing of this difficult instrument! Graham helped us along the way too, as we know nothing about piping! Our young piper is well on his way, thanks to you Graham.”-
– Marilyn Rowley

I remember walking into my first piping class completely clueless. Being the oldest person in a beginner class made me want to go up a level quickly, but my class just was not moving at a fast-enough pace to do so. Starting solo lessons with Graham has helped me tremendously to become a competent young piper. In approximately two years, I went from a shy little girl who didn’t know anything about how to play to a Grade 5 solo competitor. As I compete now, the adjudicators comment on how my hand technique is very strong for someone that hasn’t played for very long. For anyone wanting to learn how to play, no matter what level, Graham is a phenomenal choice for an instructor. He is not just an instructor. He is my mentor through becoming a piper.
– Sojeong Kim

Graham was a perfect instructor for my daughter. He taught her for 2 years. Thanks to him, my daughter improved as a musician in both instrumental and theory/technique. As a family without any Scottish background, we did not have someone my daughter could go to for assistance, however, with Graham, there was always a kind and knowledgeable person she could go to. Thanks to that, my daughter and I both became very appreciative of Scottish culture. I really recommend Graham as an instructor.
– Young Ah Uhm

I met Graham over two years ago when he was the Featured Instructor of the White Spot Pipe Band and have had the privilege to get to know him further as he was my son’s private tutor while my son was learning the chanter/bagpipes. Graham’s vast experiences within the piping community and his overall knowledge as a Professional Piper together with his ability to share those experiences and teach that knowledge to my son was second to none. My son has a learning disability and does not learn and hold information the same as most children. Graham’s patience and ability to adapt his teaching styles really assisted my son with his learning the chanter/bagpipes. It was a sad day not only for my son, but for my wife and I as well, when we learned that Graham was retiring and moving away. We all really enjoyed our time with Graham. My son still holds Graham in very high esteem and will always ask after a band practice or lesson…. “Do you think Graham would be happy the way I played?”
-Chad Greig, Surrey, BC

Like many activities requiring dexterity and integration, learning to play the bagpipes as an adult proved to be a big challenge.  After my Pipe Major and teacher retired, I became somewhat disillusioned as my progress stalled.  A couple of years ago I was fortunate to connect with Graham and to begin lessons with him at that time.  My progress has greatly improved as has my confidence and I am enjoying playing the pipes so much more than my earlier efforts.  Graham has played a major role in my development.  He is very patient, encouraging and positive.  I would encourage any piper, beginner or advanced, in the Oceanside-Nanaimo-Duncan area to connect with Graham to discuss lesson possibilities.
– Ishbel Mucklow 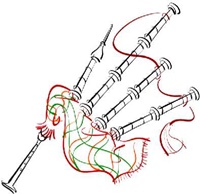